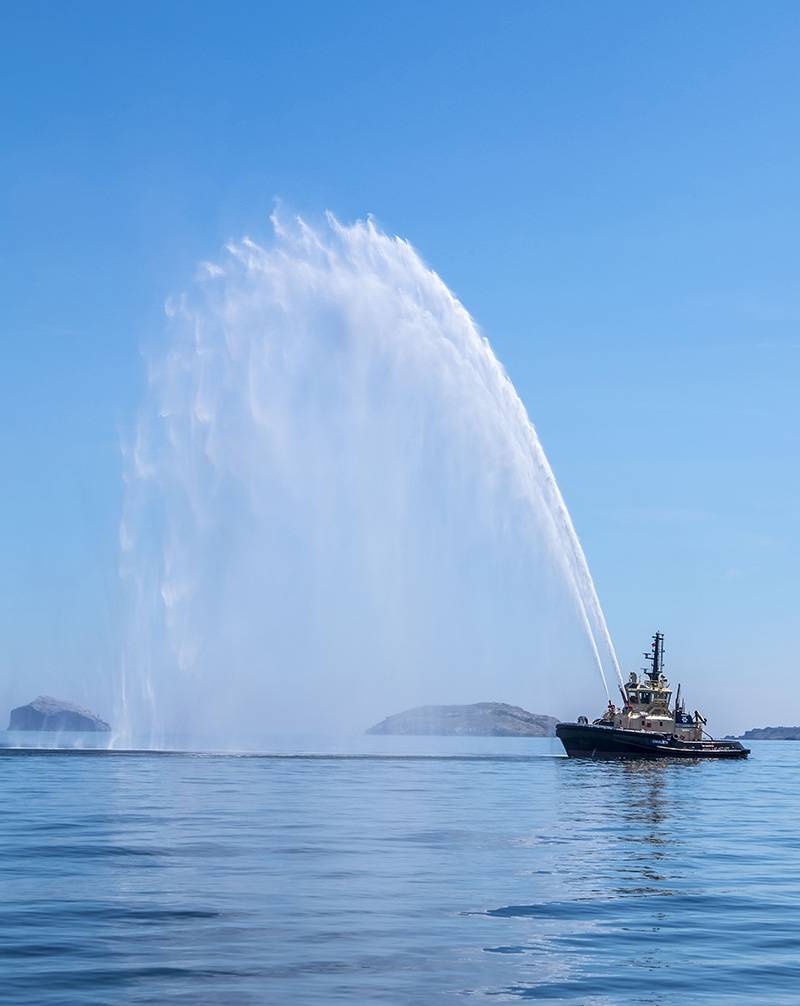 Forth Ports, the UK’s third largest port group, has today (27 July 2018) officially welcomed two new multimillion pound vessels to join their fleet of tugs and pilot boats working on the River Forth. The £6million investment in the two vessels to work on Scotland’s largest waterway sees the arrival of a powerful Sanmar tug and a state-of-the-art pilot boat from Holyhead Marine.

The tug was built by leading ship builder Sanmar, is 28 metres long with two engines producing 2,700 brake horsepower and a bollard pull of 70 tonnes. It also has fire-fighting capabilities. Tugs are work horses and have a long life span which can last decades and this new tug demonstrates the latest technology and significantly enhances the overall towage capability across the Forth Estuary. The pilot boat was designed in Scotland by Carmac Design and was built in Wales by Holyhead Marine. The pilot boat is 16 metres long and is one of the most advanced boats in operation. It is the latest evolution of a proven pilot vessel design which is used worldwide. [NB: please see notes for more details on the use and spec of the tug and pilot boat].

A ceremony was held at the Leith Cruise Terminal today where both vessels were blessed by the Port Chaplain Rev Joe O’Donnell and then the tug was named ‘Craigleith’ by Janice Hammond and the new pilot boat was named ‘Forth Puma’ by Marion Long, to follow the traditional of females naming a marine vessel. Janice is the wife of Forth Ports Chief Executive Charles Hammond, Charles has worked for the port business for 29 years. Marion Long has worked for Forth Ports for over 40 years in the group’s Edinburgh head office supporting the Chief Financial Officer.

The tug is called Craigleith, following another tradition of the tugs on the Forth being named after islands in the estuary. The Craigleith joins the Fidra, Seal Carr and Oxcar tugs already in service. The pilot boats on the Forth are traditionally named after big cats and the Forth Puma joins the fleet with Forth Leopard and Forth Tiger.

Alan McPherson, Chief Harbour Master for Forth Ports’ Scottish operations, said: “This is an exciting day for the marine team as we welcome two fantastic boats into our fleet on the River Forth. The River Forth is one of the largest and busiest waterways in the UK with over 3000 vessels navigating in the estuary including very large crude carriers (VLCC) to Hound Point, container vessels into Scotland’s busiest container terminal at Grangemouth; cruise liners calling at Leith, Rosyth and at anchorages in Queensferry and Newhaven; and gas carriers to and from Braefoot Bay. It is therefore important that we provide an excellent service and the Craigleith and the Forth Puma will further enhance this.”

Stuart Wallace, Chief Operating Office for Forth Ports Group said “This investment in marine vessels demonstrates the Group’s commitment to maintaining safe operations on the Forth as well as delivering excellent services to our customers. This is part of our ongoing investment programme in Scotland which sees us invest to support the key Scottish industries ranging from oil and gas and chemicals to agriculture and tourism. It is really satisfying to see this type of modern equipment being deployed here on the Forth and the enthusiasm which our employees are developing new skills on this type of equipment. ”