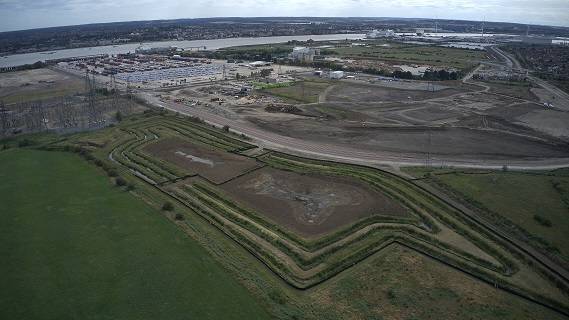 As part of the creation of the new Tilbury2 port, Thames Barges have begun transporting thousands of tons of waste ash from the construction site in Tilbury, to a new home a short distance down the river at Mucking landfill which will be used as the foundation to recreate rare habitats for a number of insects and other invertebrates. There have been 15 barge movements of around 14,500 tonnes of fly ash [watch the videos – links further below].

Tilbury2 is being constructed on brownfield land on the site of the former Tilbury power station in Thurrock and the ecology work as part of this is extensive. Parts of this brownfield land supported unusual habitats and vegetation that developed partly on waste ‘fly ash’ – a by-product from the former coal incinerators and partly on the site of a former factory that manufactured Lytag pellets made from the ash.

Specialist surveys found that these areas, as unsightly as they might seem to the untrained eye, were exceptionally important for insects and other invertebrates, as well as unusual plants and lichens.

As part of the Development Consent Order (DCO) for the construction of Tilbury2, the port committed to translocating the material that formed the basis of these unusual habitats to a new site where it would be allowed to redevelop, recolonise and expand in a more secure location. An agreement has been reached with Enovert South Limited, to use land at their Mucking landfill for this purpose, as part of that site’s final restoration.

The recreation of brownfield habitats is novel and rarely attempted, but the port team have previous experience of a successful ecology project in the past when they developed a new invertebrate habitat as part of the development of land on the edge of Tilbury for the London Distribution Park.

Commenting on this new translocation project, Peter Ward, Commercial Director at the Port of Tilbury said: “Ecology is an important part of our Tilbury2 project and we are confident that success will be achieved with the Tilbury2 fly ash and Lytag material. The ecology work at T2 is extensive and this project at Mucking is a significant part of our commitment to ensuring that we provide a successful habitat and environment for the future.

The Ash is being moved in carefully separated shipments; a thin surface layer containing seeds and vegetation fragments and maybe even dormant life stages of some of the special invertebrates and a thicker underlying ‘blinding layer’ which will create an all-important low-fertility surface and prevent the more delicate plants being swamped by vigorous grasses and weeds. I hope that this successful relocation creates a suitable habitat for these insects and invertebrates to thrive and for people to enjoy.”

Dominic Woodfield, from the Port’s ecological consultants Bioscan said “We are in an important phase of trying to ensure the fascinating brownfield resource at the former Tilbury power station site is not lost, but given a new lease of life in a secure location. We hope that our previous success at Mucking will be complemented and expanded and that what the port and Enovert have delivered there becomes a true hotspot for invertebrate conservation in the Thames Estuary, and a jewel in the crown of the Thurrock Thames Nature Park.

“Monitoring studies in future years will be critical to measuring this success, in the same way that they have revealed how the LDP compensation site has already exceeded expectations and become a wonderful place to experience the actual and metaphorical buzz that comes with standing on a site heaving with bee and other insect activity. This success has been achieved through a combination of applied ecological knowledge to the habitat design and care of execution, and the same principles apply to the current phase”.

“The addition of the Tilbury2 material to our works at Mucking will enhance the final restoration of the former landfill site. We’re pleased the Mucking site was chosen to accept the material and look forward to seeing the habitat develop within the setting of the wider nature park. Movement of the materials via the river and use of our jetty operations adds to the environmental credentials of this project.”

The material is being spread across a large area (equivalent to around twenty football pitches) at Mucking landfill, on land that has already been filled with waste and capped. The area wraps around the successful LDP compensation site which is around 3.5ha in size. The whole area will eventually be managed by Essex Wildlife Trust as part of the Thurrock Thames Nature Park and will eventually become accessible to the public.