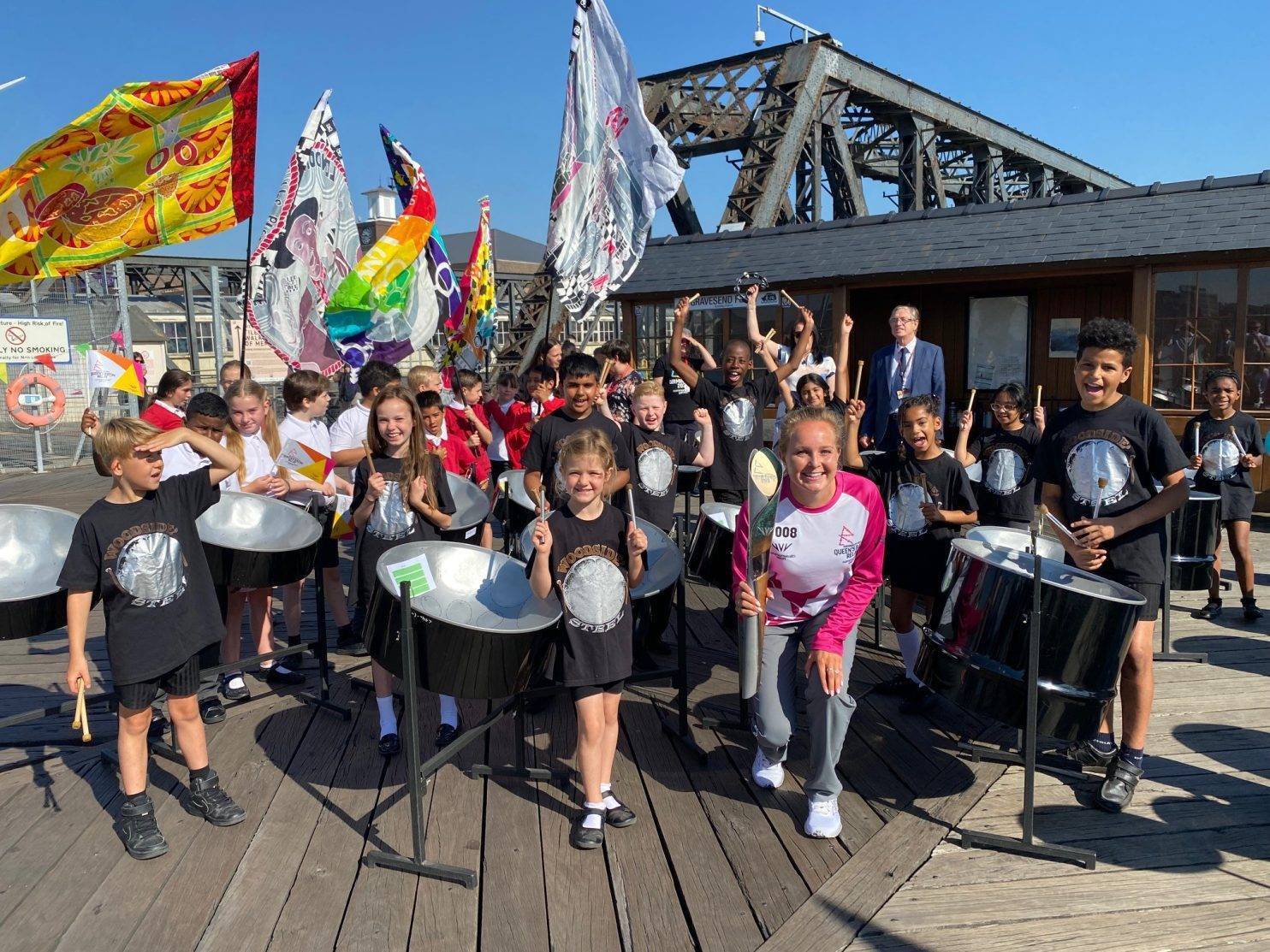 Schoolchildren from Grays, Tilbury and Chadwell St Mary cheered on The Birmingham 2022 Queen’s Baton Relay when it arrived at Tilbury on Friday 8 July.

Cllr Halden said: “I’m pleased that so many local schoolchildren could play a part in helping us welcome the 16th official Queen’s Baton Relay to Thurrock and the Port of Tilbury’s London International Cruise Terminal.

“Tilbury is a place of historical significance including the arrival of the Empire Windrush in 1948 and other ships which followed bringing people from Caribbean countries to the UK until 1971. The Tilbury Bridge Walkway of Memories played a prominent part during Windrush Day, and it is only fitting that The Queen’s Baton should pass through ahead of the Birmingham 2022 Commonwealth Games.”

Stuart Wallace, Forth Ports Chief Operating Officer and Chair of Tilbury on the Thames Trust said: “Everyone at the Port of Tilbury was honoured that the London Cruise Terminal was chosen as a venue for The Queen’s Baton Relay today. The historic cruise terminal is part of the local community where events including the Windrush Day celebrations are held each year.

“With a cruise liner on the berth today hundreds of passengers had the chance to experience the Queen’s Baton Relay, with the fantastic children from Gateway Learning Community Schools making a celebratory guard of honour for the baton’s journey. It was also great to have the talented steel pan band from Woodside Academy playing at the terminal. We wish everyone taking part in the Commonwealth Games in Birmingham the best of luck.”

Kevin Sadler, CEO of Gateway Learning Community Trust, said: “We are delighted and honoured that young people from across the Gateway Learning Community Trust can welcome the Queen’s Baton to Tilbury in advance of the Commonwealth Games. We hope that this opportunity will raise our students’ awareness of the games and may inspire them to become the athletes of the future.”

“Before the pandemic, the band regularly performed at events throughout Thurrock, including the welcoming of the Olympic Torch in 2012. The current band are aged seven to nine years old, and their first public performance was for this year’s Windrush celebration, also at the Cruise Terminal.

“Music and sports are both important at Woodside and, as a school with the Diversity Mark and the International Award, we are delighted and honoured to welcome the Queen’s Baton as it passes through our borough on its way to the Commonwealth Games in her jubilee year.”

The Baton is visiting the East of England from 8 July to 9 July in its final journey in England for the final countdown to the Commonwealth Games.