Tilbury to capitalise on opportunities to boost trade 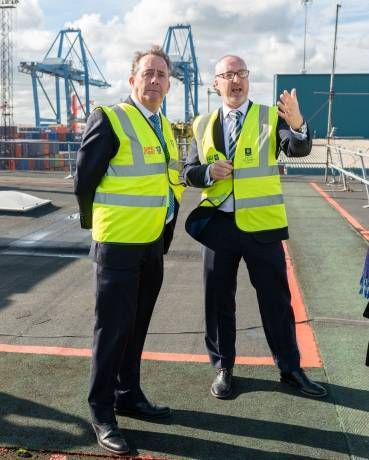 Tilbury Port and the people that work there will play a major role in helping the UK to increase international trade after we leave the European Union.

International Trade Secretary Dr Liam Fox visited Tilbury Port today (Thursday 18 October) to meet with port workers and management, as well as members of the Tilbury on the Thames Trust.

Tilbury is the fastest growing port in the UK and a £1 billion investment programme will see the port employing 9,000 people by 2020, three times more than it did in 2012. One in five of the employed people in the local area of Thurrock will work at the port.

This investment will see the amount of trade passing through the port reach 32 million tonnes each year, equivalent to more than one tonne every second.

Dr Fox praised Tilbury for leading the way in delivering year-on-year growth that creates jobs in the local area and helps to deliver prosperity across the UK.

He met with staff to hear about plans to capitalise on opportunities to increase international trade with the rest of the world, which could help to create even more jobs at Tilbury.

“Tilbury Port has a strategic position on the Thames estuary, a skilled maritime workforce and a long history of international trade. Together with the developments at Thamesport, we are seeing great improvements in the capacity of the Thames as a gateway for international trade for the future.

“We are now forging our own independent trade policy for the first time in more than 40 years and Tilbury and other ports will play a major role in helping the whole of the UK to capitalise on the opportunities to increase our trade with the rest of the world.

“I applaud and respect the hard work of the port’s workers who are helping to ensure that Britain remains a great exporting, maritime nation.”

“The substantially increased freight on the river in 2017 is tangible evidence of the success of the Thames in attracting investment and, through it, new trades. It’s work that is underpinned by our Investment Strategy to enhance commercial infrastructure up and down the river.”

Charles Hammond, Chief Executive of Forth Ports who own the Port of Tilbury said:

“It was great to welcome the Secretary of State to the port today. In the years ahead, Tilbury’s market position will be further strengthened by our proposed new port, Tilbury2.

“As we invest in our facilities to support global trade, we continue to press for road investment to keep pace through an enhanced motorway network connection. A direct link from the UK’s fastest growing port onto the country’s largest road scheme, the Lower Thames Crossing, is vital.”

Dr Fox saw Jaguars and Land Rovers ready to be shipped to West Africa and South America, as well as paper imported from Finland and Sweden, and grain that is traded with North America and Europe.

Our ports are fundamental to our global trading success as an island nation. They have a vital economic role in handling 95% of our imports and exports and they support 100,000 people around the country.

Ports directly generate £1.7 billion of trade every year, however their true value to the UK economy is worth more than three times that figure (£5.4 billion) when you include indirect impacts such as the port industry’s spending on vehicles, construction and business services.