Work progresses on the Port of Tilbury flood defence gates 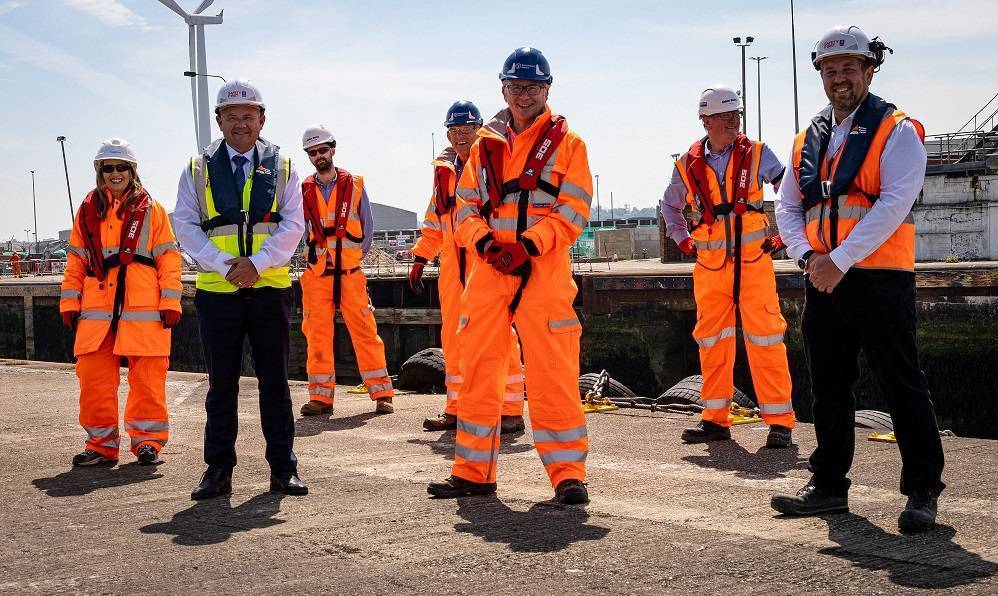 Work is progressing on this project of national importance to install new dual function lock gates on the Thames Estuary in Tilbury.

The £34m scheme is a project between the Environment Agency and the Port of Tilbury that will better protect thousands of homes and businesses in the local area from flooding.

The project will see three pairs of lock gates at the entrance lock to the port replaced. Each gate is approximately 15m tall and 19m wide; the equivalent approximately of three double decker buses high and the length of a cricket pitch wide. The outer gates will be raised in height and tie into the adjacent flood walls so that they perform the dual function of a navigational and flood risk management asset.

Since work started in January 2021 the main highlights include:

Fabrication of the new middle and inner gates is underway in Holland, and detailed design work is continuing on the new gate control systems.

“It has been great to have visited the construction site at Tilbury Port and to meet the team delivering this nationally important collaborative project. It is complex project, involving construction activities around the busy port entrance – but I’ve been really impressed by the professional approach of the joint team with the ongoing support of Tilbury Port staff as we make important strides to better protect over 2,500 properties from flooding.”

“The Tilbury Dual Function Lock Gates Project is a perfect example of collaborative working between different organisations to tackle the effects of climate change. By working together, we are providing better protection against the risk of flooding to the local communities as well as delivering a suite of wider outcomes and benefits.”

“We are pleased that the construction work for this important project is well underway. It is vitally important that we get this new engineering solution in place to provide flood defences for homes and businesses for the future. It is great to welcome the EA team to the port today for an overview of the progress of the project so far.”

Once completed the new dual function lock gates will ensure a high standard of flood protection for Tilbury along with the new navigation lock for operations at the port.

This scheme is part of the Government’s long-term investment in flood and coastal defences. Since 2015 it has invested £2.6bn to better protect the country from flooding and coastal erosion meeting the target of better protecting 300,000 homes this March.

Earlier this year, the Government announced a record £5.2 billion investment in flood and coastal defences and the National FCRM Strategy will help build a better prepared and more resilient nation.

Work started in January 2021 and is expected to last for 18 months with the new lock gates planned for installation in late 2021 / early 2022.

Once the work is completed it will ensure a high standard of flood protection for Tilbury and provide a new navigation lock for operations at the busy port.

Planning for this project has been underway with the Environment Agency and the Port of Tilbury for several years. With total scheme costs of around £34million, the Port of Tilbury London Ltd (PoTLL) is providing a multi-million-pound contribution to the project and will take responsibility for operation and maintenance of the new dual function structure. Funding has also been secured from the Anglian (Eastern) Regional Flood and Coastal Committee.

The Environment Agency’s Thames Estuary Asset Management 2100 Programme (TEAM2100) will deliver the works in partnership with a number of contractors including Jacobs and Balfour Beatty.

The Environment Agency Tilbury Barrier forms part of the Thames defences that reduce flood risk to the Purfleet, Grays and Tilbury flood cell along with The Port of Tilbury. The Port of Tilbury is the largest multi-modal port in the South East. Sitting on the north bank of the Thames just 22 nautical miles east of central London, it is perfectly placed to handle cargo for London and the rest of the South East, with easy access to the M25 and 18 million people within 75 miles.

The port has an annual throughput of 16 million tonnes per annum, estimated to have a value around £8.7 billion. The varied cargoes are spread across an estate in excess of 1,000 acres and are imported and exported by a variety of short and deep-sea vessels. Offering operational support for different cargoes, the port can support ro-ro, container, forest products, grain, and bulks as well as passenger cruises.

The current Tilbury Barrier was installed in 1981 and has already passed its designed maximum number of closures and had a number of required modifications. The Port of Tilbury London Limited (PoTLL) in planning the replacement of two sets of lock gates was keen to partner with the Environment Agency (EA) and install an outer set of gates, which can act in both an impoundment function and flood defence function.

The site area falls within the Thames Estuary 2100 strategy, which was approved by the EA Board in 2010 and by Defra and HM Treasury in 2012. The strategy sets out recommendations for managing tidal flood risk across the estuary until the end of the century and beyond. In January 1953, over 2500 properties flooded in Tilbury in a tidal surge that claimed 307 lives in England.

The TEAM2100 programme pioneers a new asset management approach for the Environment Agency, investing early to maintain the condition of flood defence assets to reduce the risk of failure. The programme aims to ensure that the tidal walls, embankments, and barriers along the Thames Estuary continue to protect 1.4 million people and £321 billion of property from tidal flooding.

The programme of work includes detailed engineering investigation, repair and refurbishment work to flood defence assets across the estuary. This work will maintain or improve the condition of current flood defences and the standard of protection they offer. The programme started in 2014 and is being jointly delivered by the Environment Agency, Jacobs and Balfour Beatty, along with other suppliers. It is the UK’s largest single programme of flood risk management work, valued at over £300m in total, and is one of the Government’s top 40 major infrastructure projects.